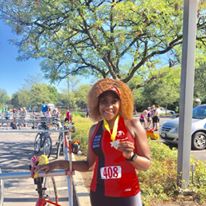 Better late, than never, I finally have some time to share my reflections from my first duathlon last weekend. I have been busy with book release, birthday, and vacation.  Ok, for those who follow my blog you know that my ultimate decision to commit to a Triathlon came from my God son.

Well, after I made the commitment, I bought a road bike and joined Major Taylor Cycling Club Chicago. I also signed up to take swimming classes, then I signed up for a duathlon.

Ok the week of the race was crazy. I was in a car accident on that Tuesday in a lot where I was supposed to get my new car.  I did not get my new car, which is a long story, and had nothing to do with the wreck Although it was a bad sign. I arranged to get a rental car to make it to race.  Another long story, but no car.  One of my good friends saw my despair and let me borrow his car.

So I get up at 2:30 AM. I could not sleep I was too excited. I get my things together, put my bike in the car. I start my drive towards Schaumburg, about 45 minutes later I arrive. I grabbed my CC and walked to the check in. I grabbed my package, and they marked my arm. I felt official. The marks  on my arm felt almost like a tattoo (I said if I ever do an Iron Man I will get a tattoo).

I find my transition area. They had them grouped by our bib numbers. I picked the end of the rack. I figured would be easier to find. In my rush, and anxiety I realized that I did not put air in my tires. So I find the organizers and there is no pump. I was surprised all of the fun rides I participated in always had mechanics with all kinds of help. I find someone with a pump and asked could I borrow his. I add some air to each tired. I get my things set up for the transitions. I place my biking shoes to the right of my bike. I make sure my bike computer is working. I decide to run with my music, because it was allowed. My mind was not right not to race with it. It is weird I don’t run with music, unless is is greater than 15miles on a solo run and during races. I love my music for a race. It is like an extra treat. I love racing. I run to race.  Run is fun, and all, but the race is like the climax- there is nothing like it. I will have my mind right when I do my first triathlon .

I talked to a few people who had done the race before. They said it was really low key, and to relax. We start our first 5k. I start out a little too fast as I usually do. It was the excitement of the race. I then ease into my average pace.   I was worried I would miss a turn, bu they were well marked and they had volunteers at every turn.  I finish faster than my usual overall average pace. I rush to my bike my landmark worked for the most part. I quickly put on my bike shoes/ helmet , ditch my music and ride out.

12.8 miles I thought this should not be too bad. I usually try to ride at least 20 miles each ride since joining Major Taylor Chicago. This ride had some hills but I was riding a great pace. I passed so many people that had passed me running. I had momentum until the end.

I get off my bike, take off my bike shoes, and get rid of the helmet. My legs were like jello. It took me half a miles to pick up any speed. Then I got back to my usual pace. I thought almost 2.5 miles to go  and I will have made it. I get into my groove, jamming to my music. I see some of the people that were running with me during the first 5k. I must have really picked up speed on my bike ride. I finish strong. I cross the finish line. I had made it. I finished my first duathlon.

After the race, I got a chance to talk to some people who actually completed the triathlon. I learned it was a pool swim. They had to do eight laps. I thought maybe that is an option for my first versus open water.  I will plan for open, but I see that I have options for a pool.

I would definitely recommend Splash Pedal Dash Duathlon, I would love to do some more duathons this season,  but I can’t find any other local ones. I discovered that biking maybe my way to decrease my overall time. I was 82nd place in the run, and 68th in the biking. I am excited to continue this process of becoming  a Triathlete.