My next blog was supposed to be a race report following my first open water triathlon. Well, my first official race was canceled. It was quite a mess. It had rained the day before, and the forecast kept changing. I was praying that it would not be so bad that they had to cancel. So I get up and drive the 45minutes to Naperville- outside of Chicago. It poured the whole way along with thunder & lightening. When I arrived, I was informed that  the race was delayed until nine so the storm system could pass.  So, we wait it out, it cleared up then started raining again. The race officials were worried that another storm systems set to more toward us would come right doing the race so they canceled it.  It was upset, and the communication was poor so that made it worse.

So, a group of us go eat, and have mimosas. It is about 9:00 and it is clear, the storm system never came. That made me more upset. Fredricka stated let us do our own triathlon. Centennial Beach where we were supposed to race opened at 11.   So that is what we did. We swam 900 yards in at the Beach. I went home, and rode on my trainer 13.3 miles, and then ran 3.1 miles. It was not the same, but it made me feel better.

My first race was to be my easy introduction into open water races, and I missed that. My coach recommended another race.  My first official race will be on July 4, 2018–Tri on the 4th of July

No easy introduction, for me. Centennial Beach is a man-made beach that is more like a large pool with no waves. Most races will not afford me with such an easy swim.  No problem training will continue. I had more first plunge into Lake Michigan the infamous Promontory Point last weeks. It was not too bad, my preparation for my first race that was canceled gave me some confidence if nothing else. 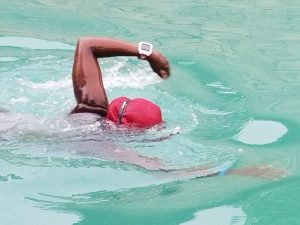 Tri for Fourth I will be ready for you, then onto Sunfish Triathlon in my home state Mississippi.