Tri on The Fourth of July– Race Report 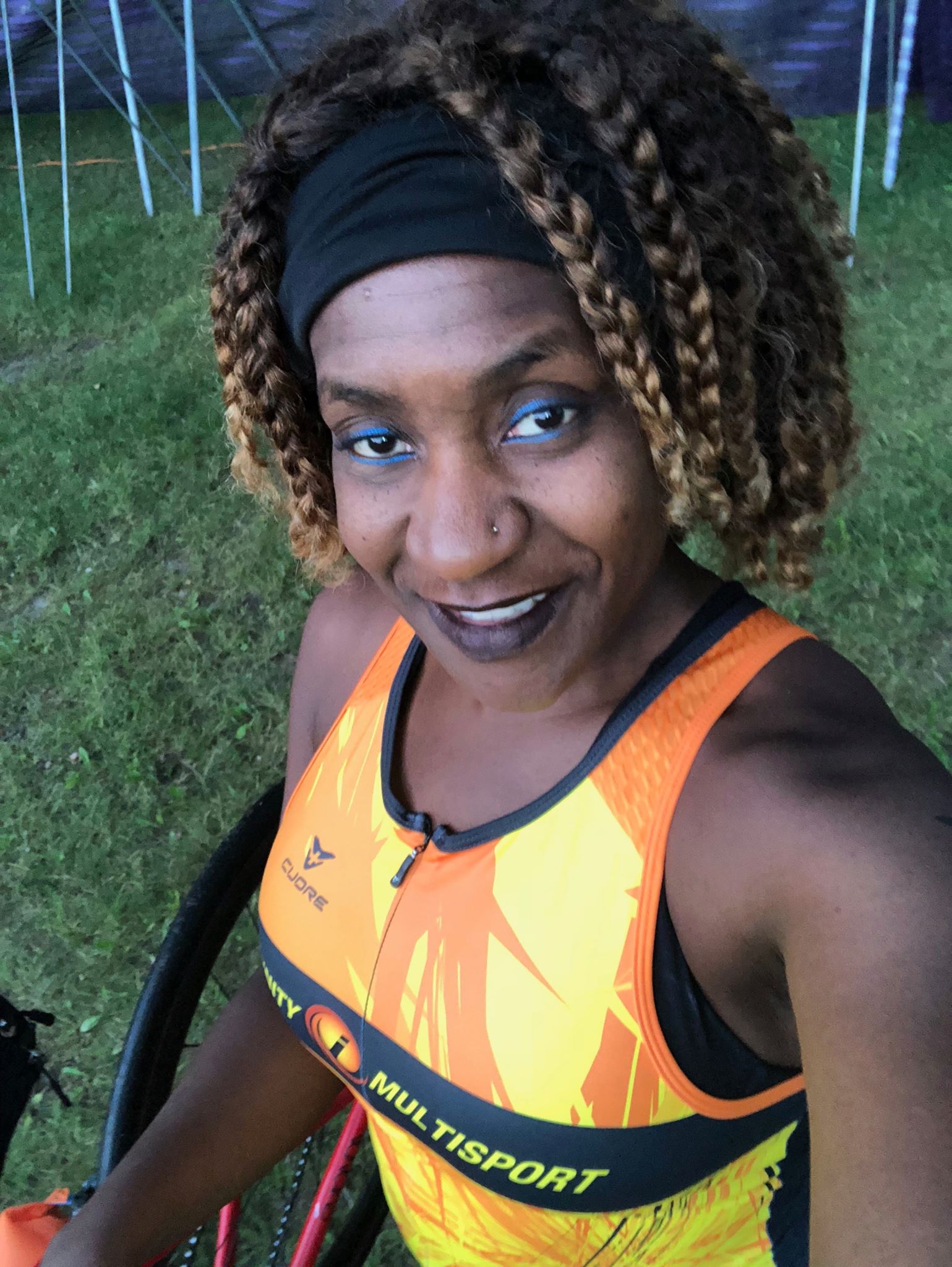 I completed my first open water triathlon. It was rough, but I made it to the finish line with a smile. My first race was in Mattawan, MI at Pretty Lake Camp. My original race was supposed to be the Women Naperville Triathlon which is an easy race for beginners. It was cancelled.  My coach recommended I do another before my race in Mississippi since I can’t wear my wetsuit as it will be too hot. I searched for one on the internet that was close and the week of July 4th. I found the perfect race on the 4th of July so I could relax and enjoy the House Picnic during weekend.

I arrived in Kalamazoo at my hotel at 3pm, and it was only eight minutes from the race. I checked in and got my items together to do a practice swim. I had emailed the race director so many times, that when I checked in she knew me. I wanted to make sure I could do a trial run the night before to calm my nerves. I checked in at 4pm and asked when I could swim, the people at the  registration desk did not know what I was talking about. So, they took me to the director who said “OK Ouida, yes you can swim at now, but buoys are not set up”. They also had to verify that I could wear my own swim cap. I am latex allergic so I can’t wear most race caps. I usually now email and ask if I can wear mine and if they have a certain color so I can match my age group. Then I hear the bad news, that the water temperature was too high. It was around 80 degrees, and that we could not wear our wet suits. I almost started crying. I was like no, I have never swam in open water without it. They asked if I have a swim buoy, and that I could wear it.  I thought that this must be a low stress race if they allowed swim buoys, so I calmed down. I walk to the swim start.  The race staff was so nice they all introduced themselves to me. There was a race meeting that was aimed at first time racers. After the meeting, some of the buoys were set up. I did a test swim to the first buoys and one of the race staff rode in a kayak beside me. After my swim, I was good. I went to my hotel, I set all my item in my transition bag and went to bed.

I arrive to transition at 6am right when it opened. I set up close to the run in from the lake.  The run in was from the lake was pretty far– upstairs, and through gravel so I wanted to be close.  I bought an awesome transition mat from Amazon, and had my items set up in order. I had my swim items on of course, but I had a towel to wipe up my feet first, and water to wash off the sand. Then, I had cycling gloves, and my cycling glasses, and head wrap in the helmet, with the socks inside my cycling shoes. I had put baby powder inside the socks. I then had my running shoes, visor, and race belt, and running glasses. I only forget to set out my nutrition to have if I needed it. People thought I was a pro with the set up, and were surprised it was my first race. I then went to get my body marked. We then walk to swim start, it was about a 10-minute walk on a trail.  I decided to wear my swim neoprene booties. They are to keep my feet warm in Lake Michigan but with running upstairs and in gravel, I figured it would give my feet some cushion.  I was in the fourth wave. They had men in two waves start first, then women age 40 and less, then women 40 and above. It was an L swim, point to point swim- 500 meters. The horn went off and I started slow, people were passing me. It was an overall small race, so not too many people around me. The last wave the relay swim started, and they all passed me. I stopped allot to catch my breath, and make sure I was going in the correct direction. The sun created a glare so I could not see some of the buoys so I would stop take off my googles, they continue swimming. One of the swim staff came and asked if he could stay with me. I said that was fine. I look around, and see that I am the last person in the water. There were a few swimmers right in front, but I was dead last. He said it is okay you are almost there and you will finish. I make it to shallow water then start to run. I run up the stairs. Some of the staff I meet the day before remembered my name, and yelled “ Go Ouida”. They were clamping and cheering. It made me not feel so bad for being the last out of the lake.

I ran to my bike strip off my booties, swim cap, and swim buoy. I threw on my head wrap, helmet, glasses, and get my gloves. I ran to mount line, and realized I dropped my gloves. I ran to grab it. Then stopped my watch. I forgot to start transition time when I got out of water.

Transition time .45 sec- again wrong as I forgot to start my Garmin

I mounted CC, and take off. My heart was racing, and I was breathing so hard. I thought did I kick to much, why am I so winded. My goal was to kill the cycling. I started off at 19 to 20 mph. The first part of the race was flat. I start passing people. My heart rate finally normalizes. There were a few turns so I had to slow to safely corner. I am so glad I drove the race course so I would be prepared. Although they did a wonderful job marking course and they had an actual person at all of the turns.  About 20 minutes into the ride there were some hills, which slowed me down a bit.  The last turn the person left her post to go to the car, again so glad I drove course as I knew the turn without a doubt.  I am still passing a few people. The end was flat so I tried to pick up the pace. I turn in and one of the staff yelled “ way to go”. I dismounted and run to the mat, rack my bike, yank off my helmet/gloves/glasses. I get my shoes, belt, visor and glasses.

The run started on a nice road. I drunk some water to hydrate. I wanted some nutrition, but I had no idea where it was. I knew I packed some the night before. I walked the first minute to get my legs. I then start my intervals. I have been running 5 to 1 intervals for years due to my plethora of running injuries. I am actually coming back from an ankle injury and was not up to my usually pace. My goal was to run 12 to 12:30 miles per min pace. My prior pace was 11:30 to 12 miles per min pace. I did well the first mile. It was trail run, but was flat, and ground was firm. After the first mile we turned in some grass, and the ground was uneven. I had to watch my footing.  There were a water station at 1.5 mile mark. I wanted an electrolyte drink, but all they had was water. I felt depleted. It thought not much too go, I can make it. The rest of the run was shady, and that is the only think I can say good about it. There was grass, hills, twigs, actually small trees that we had to step over. There was also this trough area that was like stairs so I decided to walk. I was more worried about falling or reinjuring my ankle. I thought better safe than sorry. It was not like I was going to win the race, and I would not be the last person. I walked a mile, it then leveled out, and I ran the last 0.7 miles. The last 0.2 miles was on a road. I thought now this is what I am used to, I have to try to finish strong. I run through the finish line, and got my medal. I had made it, I just thanked God that I made.  I then saw the race director she smiled and said you did it, and gave me a high five.  I was so happy.

Tri For the Fourth of July is a great race, if you like trail running, and I don’t. It also had great support staff, especially for new triathletes. (I am a triathlete now—love it) The other athletes were so friendly too. Random people came up to be after the race, and said that they were cheering for me. The swim is actually easy if you are a strong swimmer. The lake was calm, and pretty clear. I did not like the long walk to start, or long run out of the lake though. The bike was great except the turns I wanted more speed. The inclines were not bad, maximal 1045 feet. I recently rode Michigan Mountain Mayhem, so judgement maybe screwed in that area.  The run just sucked to me, as I don’t like trail course. It truly was an obstacle course.