We Fall Down, But We Get Up 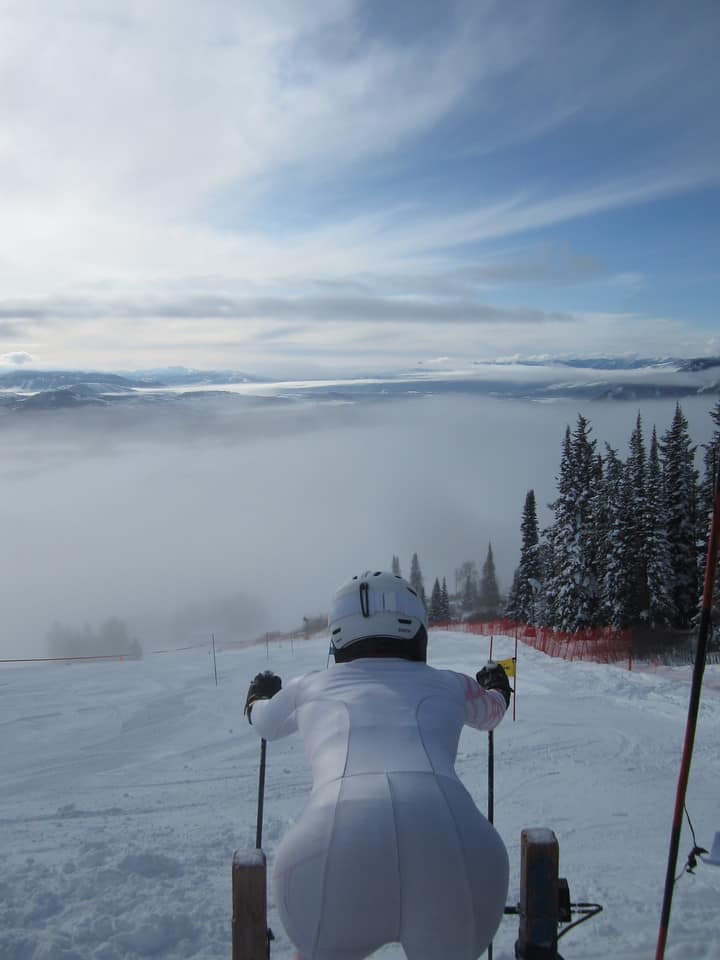 Well, maybe I should say I fall down, but I get up. I don’t know where I got my adventurous spirit. Maybe it is my Dad. When I was a little girl I was so shy. I used to be scared to raise my hand in class. Well fast forward to present day. I have a need for speed. I may not always get it, but I have the need. I love things that cause me to pause and become a little nervous, but give me the high adrenaline rush in the process. Cycling especially criterium races do that for me, chasing the guys on a one of our morning rides, and skiing gives me ultra-adrenaline rush

A couple of weeks ago I traveled to Jackson Hole for the first trip of the  ski season. I was told that is was a challenging mountain. There was a large group going for part of the week. I had the whole week off so I went early. I don’t usually ski alone, especially new mountains. I decided to take some lessons. There is always room for improvement, so I take at least one lesson per season. I was looking on Jackson Hole site I saw they had a race camp. I thought, yes I can start early so I can get faster. I race for my ski club at our National Ski Summit. My goal is to always get faster, but safely get faster. I can’t afford injuries as I have to train for my other hobbies.

I took one group lesson the day before race camp to warm up and see the mountain. I signed up for a group lesson, but I was the only person. The blessings of early season trip. We skied the whole mountain. We skied some easy bumps, got into a little powder,  some nice groomed terrain, and a few ice patches. He wore me out, that and the run I did the day prior.

Race camp started the next day most of the group was from Minnesota. They come to Jackson Hole every year for this camp, so they knew each other. They also raced every week. One person in the group even taught ski racing at a high school.  I at first was intimidated. After meeting them and skiing some runs. I realized they had people of varied levels. There was one other person who had just started skiing in Jan but he skies five days a week so he was good.  I  realized that I was not the amongst all experts which calmed me.

We skied gates, and then free skied. They made videos us in the morning, and again in the evening. We did drills, it was so much fun. The first day I was skiing over some icy terrain and leaned back and fell I was going fast about thirty miles per hour. I hit the ground hard, and the hit my hip. It was okay. I made a mental note slow down in that area. I had fell the day before in some bumps, but it was soft. One of my friends always used to say if you don’t fall you aren’t skiing hard. Well I guess I skied hard that week. At the end of the day we reviewed  all the video and the instructors gave us feedback. I could tell the difference from the morning to the afternoon gates. I was not just make turns around the gates. I learned more about strategy, the goal is not just to go fast. Same thing that I had to learning about bike criterium races. It is all about strategy

Well day #2 while free skinning I skied over a bump.  I was going fast. I was actually airborn for a second. I screamed “whoo” when I was in the air. When I landed I got a little scared and leaned back and down I went again. Okay third fall in three day. This was unusually I don’t fall that much and usually not a hard fall. I kept skiing gates and free skiing. I was enjoying the feeling of gates. I felt I was getting faster and more confident.  Maybe I was too confident after skiing the gates that were set up in our planned actually race site. I was flying doing hill. I made a turn to go the lift and not sure what happed but I fell forward. I hit my chest, and I think my head. I don’t remember hitting it, but one of the instructor noted a dent in my helmet after the fall. After I fell I had to stop and catch my breath. I felt like the wind had been knocked out of me, and my head hurt. I went chest forward, my leg were splayed open with skies on. One of the guys in my camp, asked if I wanted him to take my skies off. I sad please no. While it may be easier to get up without them. It is hard to put on. I got myself together my. Swung my legs together and got myself up. I skied to the lift. My instructor started asking me concussion questions, and again commented on the dent on my helmet. He told me I could not ski any more gates. I reluctantly said okay watched all the other ski gates and made it down. Right before I got to the mountain base I noted my left knee was huring when I was turning. I thought I pray it goes away. I put up my skies and head to our condo.

I woke up in the middle of the night with my left knee hurting. It hurt when my other leg touches it. I was like oh no we were supposed to race that day. I thought maybe I will go and do a test run to see how my knee felt. I then got up and it hurt to walk. I decided to take an L and not race. My silly behind would have been skiing hard in those gates and hurt something.  It turned out that it is not serious injury. It is a bruise, feels stable and no joint line involvement. Joint line pain would make me think of meniscus. I eased off and plan to get back to running this week again. Again I have to train for the other hobbies.  Also have to mead before the next ski trip.

As one of my ski/tri friends says, it takes a team to do this crazy stuff.