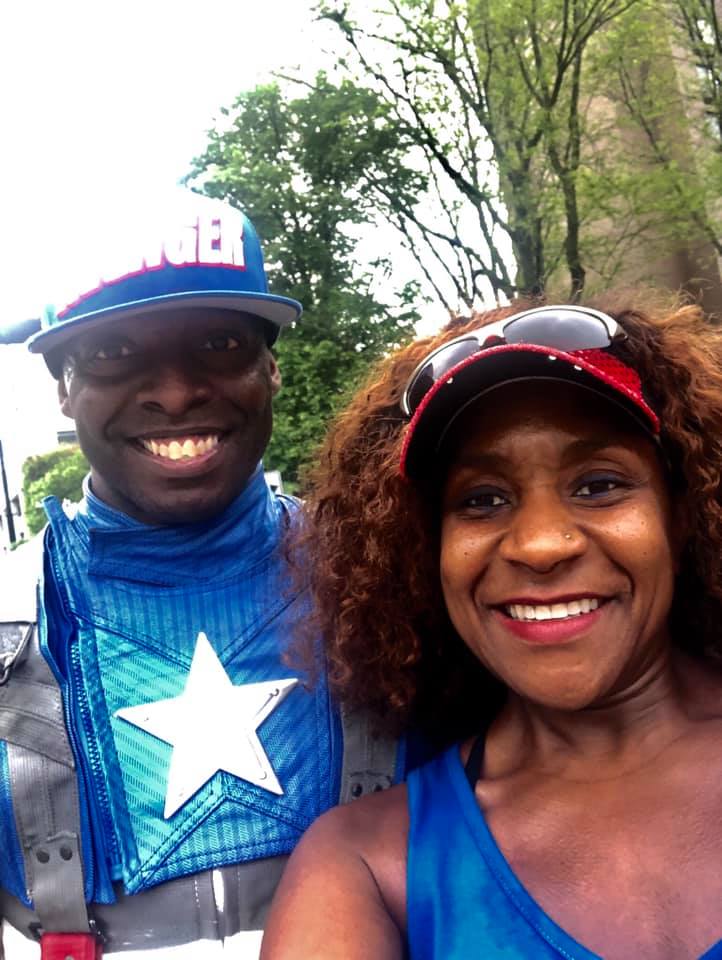 My plan was to run the Flying Pigs Marathon, but my training got off schedule due to the flu followed by a sinus infection, and a minor ski injury. I had planned an early marathon for the purpose of preparing for my Iron Man race in October. I decided to downgrade to the half because I did not want to risk getting injured

I arrived on Friday, and went straight to expo. The expo was nice, nothing special. I manage to get another race belt, because I left mine at home. The race was Sunday we met at Brown stadium the home of the Cincinnati Bengals. I love football so I looked for someone I knew on the walls, and I did.-Cris Collinsworth. It was so nice to use a real bathroom versus a porta potty at the stadium. I took full advantage and went about three times. Then it was time to head to my corral. I was looking for a few people, but there were so many people there, I could not find anyone.

It was go time. I started my regular intervals. Run five minutes, and walk one minute. I was moving alone. No knee pain, no foot pain. We ran across a couple of bridges I thought okay not too bad. I was told that the race was hilly, and from looking at the elevation chart I knew there would be hills, but I thought this was not so bad. I just wish my one minute walk would time right at the bridges. That did not happen.  I kept moving. The crowd support was so awesome. I had on a Super Girl outfit. As I ran past all of the cheer stations I heard “Go Super Girl” it made me smile and it was great motivation to keep moving and stay strong. I got to mile five, and there was a mountainous hill. It was at the start of my five-minute run interval. I say to myself “You can do this, and I started to climb. I ran and I ran, but there was no end to the mountain.  I asked some of the runners next to me had they completed this race, before and when would this hill “ mountain” end. She said we were almost to the flat area, but another one was coming. I said thank you but right now don’t care about the next one I just need the flat now. My legs were over the climbing so I started to walk.

When I got to the flat I ran and tried to make up for the extra walking. Then the next hill came. I started walking again. It was also never ending. My intervals were off. So, my plan was to walk fast on the hills, and run on the flats. That was the plan but my pace was slower than I liked. I said that is okay this is not my A race. I am going to finish, and I don’t hurt. My goal then was to have fun. I stopped and took pictures, hi-fived kids along the road. I took in all the crowd cheers. I even saw one of my favorite superheroes Captain America.

Around mile 9 we finally got to the downhill. It was steep, I tried to pick up the pace, but my quadriceps were bothering me. I kept moving.  I was happy because I was running my first love in my fitness journey. It had been a long time since I had completed a solo running race. I would highly recommend Flying Pigs, but it is a challenging course. Also the fact that I had some of my Fast Chix crew there made it even more special. It would not be idea race for a PR. I would race it again though. I would just do more hill training