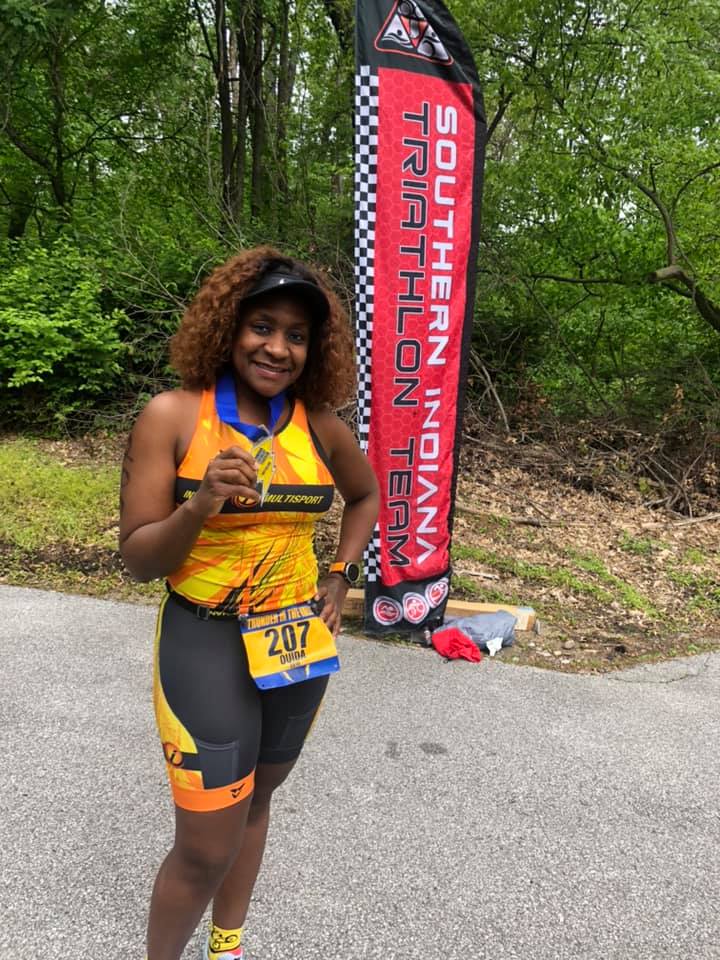 This was my first race of the season. Last year, I traveled to Atlanta to get some early open water swimming training. This year I decided to complete an early race instead. I was nervous because the race would be my first time in open water this year.

We arrived the day before the race. I wanted to ride the bike course. While I had been training all of off-season on trainer I had not had a chance to ride outside due to the crazy Chicago weather. I rode half of the course, because I ran out of time and did not want to miss the race course overview and practice swim.  I was so happy to be riding outside. I rode about 6 miles of the course I made all of the turns minus going to the turn-around.

I made it back in time to grab my wet suit, and walk over to the course talk. After the talk, we had a chance to do a practice swim. The temperature was 68 degrees. I was nervous, but the water felt good. The temperature in Terri Haute had dropped highs were in the 50s and the lows were in the high 40s. The temperature was 56 at the time of the practice swim. The race director was awesome. He said he would swim with anyone who was nervous and he would be willing to give us tips. I started with him, but I was surprisingly calm so I just kept swimming. I was sighting without stopping. In all my races last year I stopped and treaded water to sight. I looked over my numbers from last year and my slowest time was 4:00 min/100 yards because I stopped so much. Don’t get me wrong I am still not a fast swimmer. I could not see the orange buoy where  we were supposed to turn was so I used the yellow sighting buoys. I even used someone yellow swim cap that I thought was a buoy. I made the first turn, then I saw the next orange buoy. I kept swimming. After the second orange buoy, I made a turn to head back to the end. The buoys were set up in a triangle configuration. I could not see the last buoy, but there was a green building by the exit point and I used it. I made it back and I did not stop other than talking to a few people – race director and the women with the yellow cap that I thought was a buoy.

Transition set up was at 6:00am. I always like to get there early so I can get an end spot. One, it is easier to find my bike, and there is always more room. I set up my items in order. It was cold 45 degrees so my plan was to dry off, but on my dry triathlete top, and then my triathlete jacket so I would not be cold on bike. So I  had a towel, my top/jacket, shoes and had socks with baby powder in them. Powder help with the smell. I had my helmet and glasses on the handle bars. I then set up everything for the run. I had my visor, shoes, with elastic laces, race belt with number, dates, and collapsible water bottle for run.

I then went back to car, and took a power nap, after body marking. My race was scheduled to start at 9 . Around eight I walked to swim start to see the Olympic start and to see the two people from my triathlon group start. I had put on my wet suit to keep warm. I only had my triathlon shorts, and sports bra on under wet suit. Again, I wanted to keep my post swim clothes dry. They allowed us to warm up for the swim. My first thought was not to warm up, because I did the practice swim the day before. Then I thought let me actually warm up and tough out the few minutes of cold after the warm up. They made us get out of the water after the warm up. Only the elite athletes were allowed to stay in.  So I get in and did some bobs. I tried to swim freestyle but I could not keep my face in the water. The contrast from cold to 68 water I guess was the problem. I just kept bobbing and trying to swim freestyle. I eventually got over the shock and my heart rate calmed down.  It was then time to get out of the water. We lined up by our estimated swim time. I went by what I swam during the practice. Before getting in we all walked over the mat and gave them our race number. I water through the shallow muck. They I started swimming. My mantra for the day was” God is Awesome “it went with my three stokes. Three strokes breath, three more strokes sight. I kept that pattern. I did stop once. I saw a lady just treading. I asked was she okay then I went back to my routine. I passed the yellow buoy. There was space between the swimmers that helped me stay calm. I saw the orange buoy, I turned right. I kept going. I saw the orange buoy. I thought “Yes, I got this”. I kept my routine.  I made it to the second orange buoy. I had gone out a little too far on the practice swim. 820 yards was the distance and I had 970 yards on my Garmin.  So I made sure to veer right. I could see the green building and the last sighting yellow buoy. I saw one swimmer to my left. I stopped just to make sure he was not swimming in to me. I saw that the end was near. I kept swimming until my hand could touch the ground. I ran up the stairs. The wet suit strippers helped me get out of my suit. I then ran to transition area.

I only had my sport bra top, so I could put on my dry triathlete top and jacket on to warm up. This was after I made sure I dried off.   I then put my sock on. I then put my cycling shoes and my helmet, and glasses. I then rushed to the mount line. My transition I knew would be longer, but it was longer than I liked .

Cycling is usually the best of the disciples although I have been running longer. The race was only the second time I had been on my bike due to Chicago crazy winter/spring weather. I did not feel in great bike shape, but it was fun to be outside riding. I like hills—rolling. Yes, I think it is because I so love descents. Well, the race started with a few hills. I had my power meter and was anazlying my efforts on the climb, descents, and when the headwinds hit me.  Around mile 10 my back started bothering me. My back had never hurt before on a ride. Outside of when my saddle height was off after a cycling trip last year. I tried to do some stretches especially on descents but it did not go away. I just keep spinning. I made it to the turn around.  Early in the ride I had a packet of almond butter. I also had one bottle of water with Ultima. I figured I would get a tailwind but it did not feel like it was much. I made it to the last hills and descent and was almost back to transition.

I run to my area. I quickly racked my bike, took off my shoes, and helmet. I grabbed my shoes, visor, water bottle.  I was in a rush and left my dates.

I then started my run. I walked the first two minutes to get my legs back. I continued running interval 5/1—run five minutes walk 1 minute. I was feeling good until the trail part of the run. I walked most of the trail then I got back to my usual intervals.

I would highly recommend Thunder in the Valley Triathlon. It is a nice small race that is well supported. It is great to get some early open water swim in especially in Mid-West. Only part I didn’t like was the trail part of the run.

After I finished the race, and was walking back to my car, I saw a man running toward the finish line.  I thought he was just tired, and tried to give him some motivation. He collapsed, and I was first person to see him. I yelled out to call 911. Others came to help. First, he was breathing then he stopped and we had to do CPR. Praise God he resumed breathing and was able to walk to stretcher for the ambulance. Although I am a doctor I have never had to perform CPR on a real person. That was the scariest part of the day.