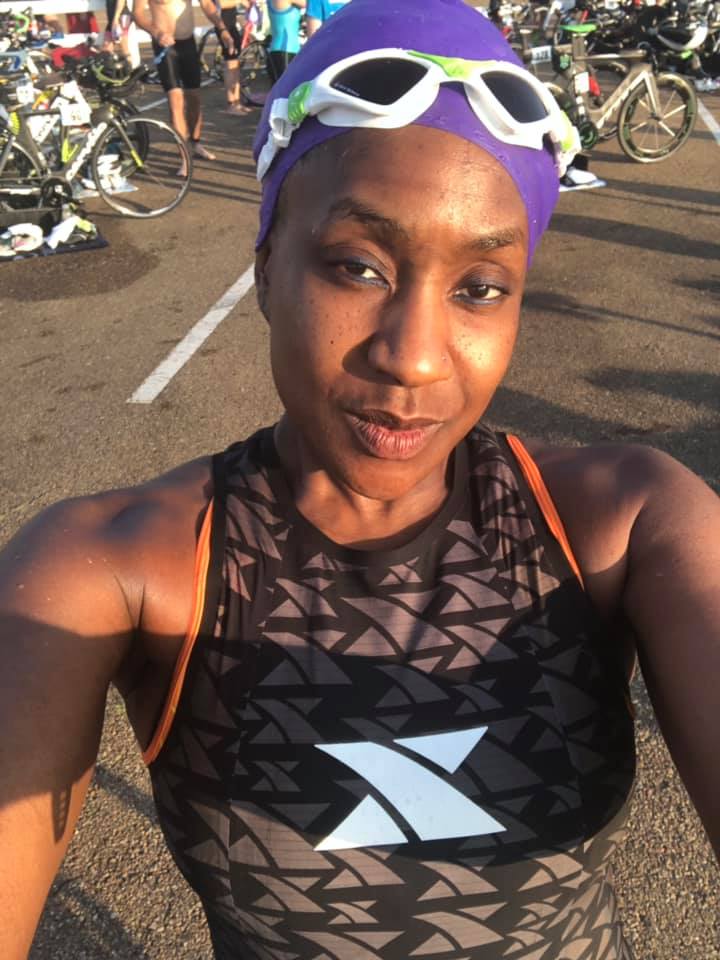 Well, the title lived up to it’s name. I did not originally have this race on my calendar. I wanted to go home to see the family early before training got too crazy, and before it got too hot in Mississippi. My Goddaughter dance recital was the same weekend of the race so it was perfect. I could kill two birds in one stone. I could see my family and race.

I knew about this race originally from my Godson. He texted me the following: ” There is a race this weekend- swim, bike run in Jackson. They give you four hours. That is plenty of time for you.”

I asked if he wanted me to come home. He said yes. This was the Wednesday and the race was on Sunday. He knew that I biked leisurely and ran. He didn’t know that I really did not know how to swim. I told him I would do it next year. So I signed up for swim lessons, bought a road bike, and joined Major Taylor cycling club. This was two years ago. Last year I did travel to Mississippi. I completed my second triathlon in Mississippi a year later but decided to do Sunfish in Meridian to give me more time to get used to open water as Heatwave is early in season. So this would be the year to do the Heatwave.

I picked up my bike on Friday. I had the numbers from my bike fit emailed to the shop. They gave me a Cannondale Synapse. The first thing I noticed was it was heavier than my CC (my bike). I thought well I can’t have the luxury of my light Trek. I grabbed the bike, and headed to packet pick up. I was meeting a friend from Black Triathlete Association (BTA) that was going to do a quick practice swim with me. I had met him last year in Meridian. After packet pick up I rode the bike course in my vehicle. It was pretty flat, mostly the Natchez Trace. I grabbed the bike and completed a practice ride on the run course. I noticed I had no power when I was in the big ring. I also noticed a loud noise. I thought “I can’t deal with this”. I called the bike shop, and took it back. I asked for another bike. I asked for a lighter carbon one too. They have another Cannondale Synapse that was much lighter. It looked similar to my (B bike) Cannondale Evo. I headed back and met David for a brief practice swim. The water was brown. The temperature was nice though. The swim was in a reservoir. After passing a dock, there was a small current and it startled me a bit. I thought I am so glad I brought my motion sickness patches. Current, waves sometime makes me nauseous so my coach recommended patches. It works in Lake Michigan I knew it would be great in that little current. David explained the course, as he had done the race before. Although they changed the course I would find out the following day. We don’t swim far as there were boats in the area. I then headed to rest and get ready for race the next day.

I was so nervous I could not eat breakfast. I get a nervous stomach before races-especially triathlons. The swim makes me nervous. I tried to remind myself it was the same distance that I swam two weeks ago at my race in Terre Haute. My brother came to watch. My best friend with my God children could not come as they were getting ready for my Goddaughter’s weekend recital of events. Also I had a friend that I had met in 2012 while running Marine Corp Marathon, and her daughter was actually racing. It was great to see some familar faces. I also met a fellow member of Team Zoot. Zoot is one of my sponsors and there are teams all over. The start was a rolling start. They lined athletes up by number. I was 100, my time came up. I run in to the deep part, and started swimming. I could feel my heart rate go up. It was not too bad. I had gotten in the water earlier to warm up. I have learned that calms me a great deal. I start with my mantra. These are key for my swim. It keeps all those fears, and bad thoughts out of my mind. Today my mantra were “I can swim” and “Jesus is Lord”. I do three stroke repeat my mantra, three more and my other mantra. Then I sighted to make sure I was headed in the correct direction. The course was set up like a rectangle. The first buoy was orange and at the end of a dock. It was just a sighting buoy. I passed it on my right. I saw the big orange buoy, and swam to it and made a right. I kept swimming. I was calm. I sew the next orange buoy, and turned. I see the last orange buoy. I kept concentrating on my mantra Jesus in Lord. It calmed me, knowing that he has control and while was in this reservoir that he had me. Next I had this tickle in my throat. I felt like I needed to cough. No, I thought, and tried suppress the feeling. It did not go away. So I treaded, and coughed. One of the safety crew was near and asked was I okay. I say yes, he told me to grab the kayak if I needed to. I grabbed and finished my cough spell. I then got right back to it. The last turn buoy was in sight. I turned right. I could not see the next sighting buoy or the finish area. I just swam between the kayaks and followed the other swimmers. I eventually saw the buoy on the other end of the dock. I kept swimming. I then saw the volunteers at the finish line waving. I was almost there. A few more strokes and I was done. I saw my brother and my marathon friend with her husband.

Goal Time: 23 minutes Actual Time: 33.48 minutes Garmin states I swam yards almost 1202 yards. This was way more than course was supposed to be– 880 yards. I believe it was do to poor set up as was difficult to sight.

I ran to my bike, and took off my swim skin. I put on my sock, cycling shoes, helmet, and cycling glasses. I grabbed my almond butter to eat on course. I headed out on the course.

The course was flat, but there was a head wind. I was going slower than I liked, but I felt like I was working hard. I did not have my power meter to gauge my effort. So I just keep going, as hard as I could. I passed a few people, and a few people passed me. The temperature was actually good for Mississippi during the bike. I had a bottle of fuel. I recently started using Glyco-durance. I also eat my almond butter. I continued pedaling until I got to the turn-around spot. On the way back it seemed like it was easier. I continue to give it my all. I could see runners on the course so I knew I was near. The second hour I used an electrolyte drink. I use an Ultima, Hydro-durance. I finally made it back to my bike.

Bike usually my best, but I was not close to my goal. I need to get my bike legs back.

I headed to my rack my bike, took off my helmet, cycling shoes. I put on my running shoes. I grabbed my visor, running glasses, water mixed with Ultima and hydro-durance, and my dates.

I head out to the Multipurpose trail. It was hot by now and I was feeling it. I walked about 2 minutes then the plan was to do my usually five minute run, with a one minute walk. I continued this pattern for about 1.5 miles. I then feel lightheaded. I decided to do three minute run with a 2 minute walk. I continued to drink. I also grabbed more water at the aid stations. I felt better, but I still was hot, and had no energy. I kept moving, but my I just ran for awhile then walked. I have no energy. There was a person in from of me in sight. When she disappeared I ran. It gave me some extra motivation to keep moving. I make it to the last aid stop. I had less than a mile left. I see a lady who was training for an IronMan so she was doing extra miles. She talked to me and encouraged me. I then saw my brother and my friend David from BTA with his family at near finish line . I made the last turn and I saw the finish line. I was finally finished. Finish line I was not met with a medal I was met with a person asking about my time chip.

Heatwave Olympic Triathlon was a decent race. It was not my best as I don’t like heat. I also like medals. Although I don’t race for medals, I like to receive one after I run, bike, and swim. My swim time would have been close to my goal if I did not swim all the extra yards. Transition time were good. My bike was slower than I liked. Part of it was different bike, and have not ridden outside much due to weather. Heat was also played a role in my run. I walked a good deal of it. What made my trip awesome was time with family. Although race kicked my butt, it did help to prepare me for my next race the following week. Race report to follow next week.