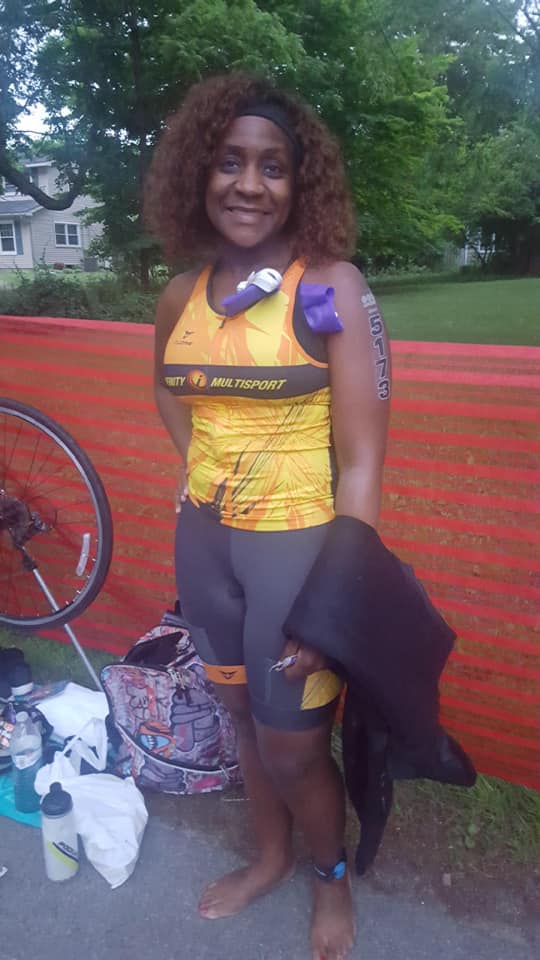 My coach recommended an early 70.3 to my race schedule in order to prepare me for my “A” race IronMan Louisville 140.6. Grand Rapids was close and a few of the people in my triathlon group had completed it in the past.

I arrived in Grand Rapids on Friday evening. My plan was to get there early to ride the bike course in my vehicle. I was so tired so I ended up sleeping later than I anticipated. It was 8pm by the time I arrived and checked into my hotel.

I woke up early and and drove to the beginning of the run course. I ran about thirty minutes of the course. Then I drove the cycling course in my vehicle. Then I headed over to pick up my packet. I ran into our team Zoot Great Lakes team captain. After attending the athlete briefing, I rode about forty minutes of the bike course. The road was bumpy, and had some road kill. I was not quite comfortable with aero, so I was mainly on bull horns. Following my test ride, I went to a local YMCA for a 30 minute swim. I usually carb load with Asian pasta prior to big races- marathon, half Iron Man distance, etc. Pad Thai is meal of course.

I woke up at 4am, and headed to the bike drop off spot. Grand Rapids has no parking near the transition. So they have volunteers who will hold your bike at the designated spot unless athletes have some one drop them off. After bike drop off there are three parking lots that have buses that will bring athletes back the drop off spot to get bike and walk to transition. I was so early there were parking spots by drop off. I then walked half of a mile to transition The half distance was way in the back. I set up my items like I always, do after I inflated my tires. I also put my items in plastic as it has already started to rain. There was seventy percent chance of rain that morning. I grabbed my wet suit, googles, and swim cap. I am latex allergic so I purchased silicone caps in a number of colors that way if they don’t have any non-latex I will have the same color cap as my wave. There was a practice swim at 6:15 am. I warmed up and realized I could not see with the polarized lenses. I headed back and grabbed my clear goggles. I did some additional practice strokes. Then it was time to line up.

The swim continues to makes me nervous, but each race is better than the one before. The start was in waves. All of the relay, swim only, aqua-bike, and men age 39 and younger were in wave one. Wave two was men age 40 and over. Then it was our turn. I made a few friends while we were waiting to start. There was plenty of space between everyone in my wave. We had to swim pass the green, orange buoys to the yellow bouy. Bouys were in triangle configuration and we swam counterclockwise. The green was for sprint, orange for Olympic, and yellow for half distance. My mantra for the day were “I can swim”, “Jesus is Lord”. I kept swimming and felt like I was the only one out there. I would occasionally see a purple cap so I knew I was not the last person out there. I got to the orange buoy and someone with a purple cap cut in front of me. I thought” She is going the wrong way”. I don’t see the yellow bouy so I stopped for a second. I finally saw it, and it looked far. I kept swimming and finally make it. I turned left, and kept stroking. One more left, and I would be headed back to the swim finish. I saw another purple cap, and I thought yes I am not alone. The sprint waves had started so I saw sea of pink hats. Allot of people make me nervous. There was supposed to be a big pink dancing prop at the finish and I could not see it. So I followed the pink caps. I got a little uncomfortable as people were touching my legs. I just kicked more. Someone kicked me in the head. I kept moving but my pace was slower, and I am sure I was not swimming a straight line. I finally see the end. One of the volunteers pulled me up and I thought”praise God I made it” Wet suit strippers were wonderful. I ran to transition. It seemed like I would never make it back to my bike.

I ran to my bike. I put on my sock, cycling shoes, helmet, and cycling glasses. Although I had my plastic bag some of my stuff still got wet I grabbed my almond butter/waffle to eat on course. I headed out to the course.

The course was flat initially but I am still was not too comfortable with aero. There were also so many people due to the multiple distances until I passed the Olympic turn around. I was going slower than I liked, but I was scared to be aggressive with wet streets, and aero. I keep going, as hard as could for conditions. I felt like I was the only person on the course after the Olympic turn around. I finally saw a few people that were coming back for half distance. The rain continued. I had a bottle of fuel. I recently started using Glyco-durance- all fluid fuel. I also ate my almond butter. I saw more people and passed a few people. There were some rolling hills at the end of the course. I finally make it to turn around. On the way back it seemed like it was easier. I was able to stay in aero for longer, and I was picking up speed. The second hour I used an electrolyte drink. I use an Ultima, Hydro-durance combination. I also ate a honey-stinger waffle. I continued to pass people. It was pouring but I was rolling. I even starting signing “Blame It On the Rain”. Might as well have fun. Third hour I went back to my Glyco-durance bottle. I had three bottles and a speed fill so I did not need the water bottle stops. I passed a large group and they informed me they are end of the race. If I did not stay ahead of them I would be pulled. I thought no problem. I envisioned them like the Grim Reaper. I passed a few more people. I had to seriously use the bathroom, and there were no porta potties. I thought about peeing on my bike but I just could not. I stopped in some weeds where no one was around. I just placed my bike down, dropped a squat and pissed. Hurried back on my bike and took off. Had to stay in front of the Grim Reaper Crew. My legs felt great. I thought that maybe this expensive TT bike maybe worth it. I make it back to transition in one piece and more comfortable with my OG- TT bike.

I headed to my rack my bike, took off my helmet, cycling shoes. I put on my running shoes. I grabbed my visor, running glasses, water mixed with Ultima and hydro-durance, and my dates. I was soaking wet and so was some of my stuff. I did not care anymore. I ran out of transition as fast as I could. People who were finishing were screaming running up give her space. I see some of my team who had completed the Olympic distance.

I head out to the course. The plan was to do my usually five minute run, with a one minute walk. I continued this pattern. My pace was good, although I was feeling it. I kept moving. I see some of my triathlete team who were finishing the run for the Olympic distance. I then sprained my ankle. My foot got caught in a pot hole. I screamed. Someone yelled keep moving don’t let the pain set in. I listened, said a prayer and kept running. It was wonderful as my ankle did not start hurting. Toward the end of the first loop there were some hills. I walked the inclines and tried to get back in my usually intervals. I make it back and see volunteer she stated first loop to turn on trail, and 2nd keep straight. I see the Grim Reaper Crew they yell, awesome we knew you would make it. I wanted to keep straight but I kept on going. I had to talk to myself to pay attention to puddles, and holes. I zone out running. This is the reason that I sprained my ankle and have several times in the past. I continued my running pace was slowing, and my running intervals increments became more of a long walk with an occasional sprint. The cut- off for the race was 3:15 pm, no matter time the wave started. So my total time could not be over 8:05. I thought unfair as Iron-Man branded races allow 8:30. Also the men get 10 more minutes. I had to keep moving to make it. My time for Iron Man Augusta 70.3 was 8:02 and that was my “A” race at the end of the season. Doubt creeped into my head, but I kept going. I made a friend and we encouraged each other to make it. We made it, and I shed a few tears prior to crossing the finish line. I crossed the finish line at 8:01, smiling and lips popping. and that was a PR for me.

I enjoyed Grand Rapids Triathlon. It pushed me. I did not make my bike or run goal. If I would have been aggressive at start of bike I know I would. Also maybe if I did not sprain my ankle and the course was truly flat I would have. I know have more work to do with biking and running. My schedule called for Michigan Mountain Mayhem the following week and it ended up being quite the adventure. Swim is coming along- sighting and being more comfortable with the masses and I know I will be okay. Training continues, next triathlon is Ohio 70.3.