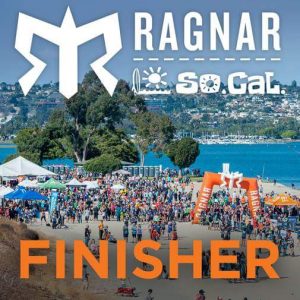 First of all you may ask “What is Ragnar”?  Let me begin with this video.

12 people, 2 days, 2 vans add an Ultra, and that equals quite an adventure.

Ragnar was just what I needed. It started with a four hour delay at Chicago O’Hare airport. I kept the faith and resisted the temptation of Garrett’s popcorn which was across from my gate. Plane was late, then we had no pilot, then we needed fuel, then we needed another flight attendant. It finally came together and we were off, and headed to San Diego.

The team festivities started with a group dinner at Fire and Ice. I was beyond happy because they had tofu and salad. I eat mainly a vegan diet so sometimes eating out can be difficult for me.

After dinner it was off to bed for everyone. The Ultra team had to start at 5am. We were lucky to sleep a little later. Van 1 started at 8am. We were hype. Van 1 had six people.

Our legs ran smoothly no one had any problems. Alicia brought it in for Van 1. She had the hardest leg, and it was hot. That made it even worse.

We met Van 2 at a major exchange point. Van 2 got to really sleep in and eat breakfast at McDonald’s. They started around 1:30 in the afternoon. Alicia passed the torch to Van  2 to continue to the madness of Ragnar

Our wonderful navigator guided Curt to our next major exchange where we would eat, and rest until it was time to run the second round. It was nice to have a fellow vegetarian person in my Van. I was able to find a place, and not eat on my own. After eating, it was time to pull out my sleeping bag to catch a quick nap.  A few hours passes and it was time to run again.  Su would start us off again. It was about 8 pm. We wound now have to wear night wear- head lights, tail lights and a reflective vests.

Night running was an experience I missed last year during Ragnar Chicago. All my legs were in the day. This was my best run. I was scared that something in the woods would come out and get me. This actually made me run faster. I also was able to get some quality kills. A kill is when you pass someone. I only got about three last year. I was a able to get five this one leg alone. I was rolling up those hills. Almost four miles later, I would pass it on to Curt.

We finished our six legs and met Van 2 at the next major exchange. It was time to sleep; it was about 1am.  I got my sleeping bag to sleep. I  was knocked out; it is amazing how comfortable a sleeping bag can be when you are worn out. Van 2 was running while we were sleep. About 4.5 hours later it was time to start the third round.

It was Su’s turn to start the third and final round. It was 5am the next morning. By the time my leg came up again, the sun was rising. I was so excite. A new day, my last leg, my foot had hung in there. I have a condition call plantar fascitis which is irritation of the fascia ( tissue)  on the bottom of my foot. It hurts the most the first thing in the morning. It had been bothering me for sometime. I only had 3.6 miles to go, and I was ready. I saw the beautiful coast, the water, and all the runners in the area getting in their Saturday morning runs.  I was in heaven.

Some people run to eat, run for beer. I run to see beautiful sites, and along the process I meet the coolest people. I was thinking who could as for more.  Almost four miles later, I was done with my legs.

I passed it on to Curt. Runners 5, and 6 finished their final legs. Van 1 was done.
It was time to travel to the last major exchange to meet Van 2.

We had a few hours to shower and change and met Van 2 at the end of it all. Van 2 did their last legs. We all ran in together at the finish line.

I am so happy I decided to do Ragnar. Running is my life, it gives me joy, it helps free my mind, it helps me stay grounded and realize what is important. It was just want I needed.