Bike the Drive- One of the Best Ways to Cross Train! 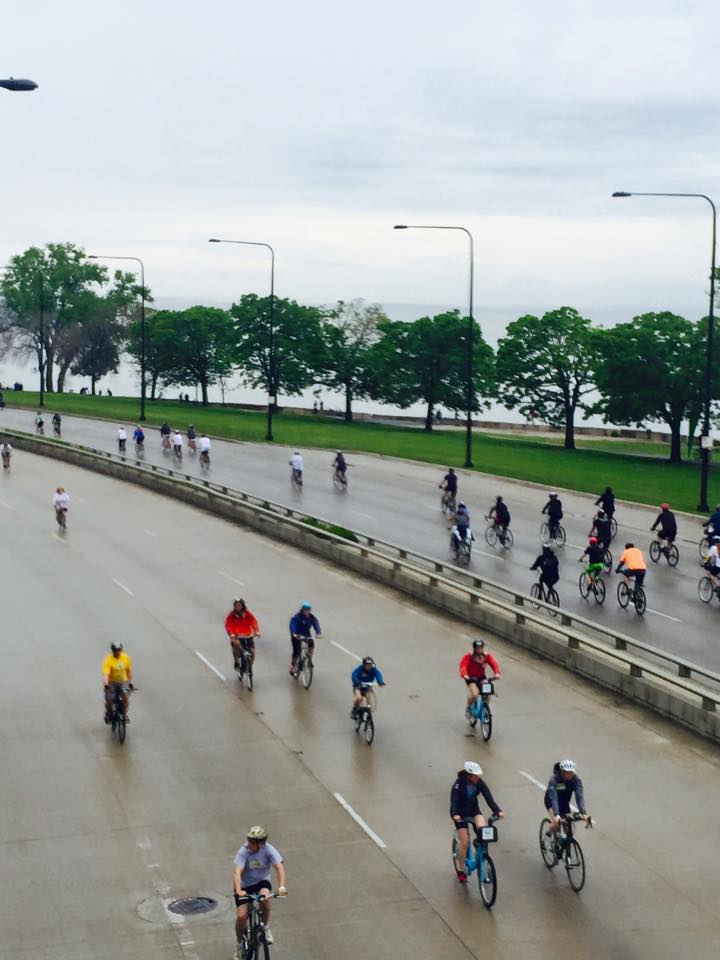 I have had a host of injuries during my five years of distant running. The worse being a meniscus tear in my right knee. Well now I have a nagging injury that has been going on since June 2014. I have mentioned my foot injury in few of my past blogs. My nagging injury is plantar fasciitis. The plantar fascia is the thick tissue on the bottom of the foot. It connects the heel bone to the toes and creates the arch of the foot. When this tissue becomes swollen or inflamed, it is called plantar fasciitis.

Well despite my nagging injury, I continued to run. I did take a month off after my marathon in October 2014 that was a first for me. I then started training for the Pro Football Hall of Fame Marathon. My training started off quite well, I had no foot pain, but in February 2015, it returned. I downgraded the Pro Football Hall of Fame marathon to a half marathon, as mentioned in my last blog post. I ran Ragnar Relay two weeks, prior to the half marathon. I then ran Susan G. Komen 10k race two weeks following the half marathon. I had to run that race. It has been an annual tradition for me since my mother’s diagnosis, and eventually passing away from breast cancer. After the race my foot hurt so much, I could barely walk. When my pain initial stared in June 2014, I only had pain in morning and after long runs. Long runs were runs more than eight or so miles. I am a doctor, and I often treat myself, which has its pros and cons. I put myself in a walking boot for a little over a week to take pressure off my foot. I also wrote myself a prescription for physical therapy. I stopped running. I have missed few races in the process.

To cross train I have been biking up to 5 to 6 times a week.  Mainly  spinning, but the weather has finally warmed up, so I have taken my bike out a few times. Every year during Memorial Day in Chicago, Lake Shore Drive is shut down for six hours for Bike to Drive. It is an awesome experience to ride on the road, no cars, just bikes. The ride is thirty miles. I ride with a group of friends. I had to miss Solider Field 10 miler race, which takes place the same weekend due to my injury, but biking does not bother my foot.

Bike to Drive started in Grant Park. I did the ride with two groups- Slow Chicago, and Outdoor Afro. Slow Roll is a global movement founded in 2010. Slow Roll Chicago is a community-based organization utilizing bicycles to connect a diverse group of people, transform lives, and improve the condition of communities by organizing community bicycle rides and other bicycling-related programs throughout the greater Chicago area.

Outdoor Afro is a social community that reconnects African-Americans with natural spaces and one another through recreational activities such as camping, hiking, biking, birding, fishing, gardening, skiing — and more.

We started at Grant Park. We met at the Slow Roll Tent. We then rode south to the Museum of Science and Industry. We had a check point there. At the checkpoint there were mechanics for those who have problems with their bike as one of my friends did. They also have food and water. It was a great day despite the rain. I was prepared for the rain with my poncho. The rain did keep few people home. The Museum was also a turn around point. Our group would then head north. We lost one of our group members due to bike trouble.

We head back north towards Grant Park. There was another checkpoint, but we decided to continue. The north part of the trail was very hilly. There are small rolling hills. This year the hills were easier than last year. I had only bought my bike a week before the event so I was not in the best biking shape. We traveled to Hollywood section of North Chicago. There was another checkpoint. We stopped and then headed back to Grant Park. We were on our last leg. We picked up the pace to make it back, before they opened up Lake Shore Drive.

The very last part of the route was a steep hill by Navy Pier. Often people get off their bike and walk up it. My heart rate was up, and I was pumping. I got a little of the rush that I get when I am running. I love a challenge and that was the most challenging part of the day.

We did it, 30 mile bike ride. My quadriceps were feeling it, but I was happy. I could not run, but I still could work out. It was so much better with friends. The reason I actually love running races is the people, the crowds, and the supporters who cheer. Bike to Drive gave me a little of that so I was happy.

I am down, but not out. I will continue my recovery. You can’t keep a good woman down for too long. I have races to run. “ Keep it Moving. Keep it Moving”