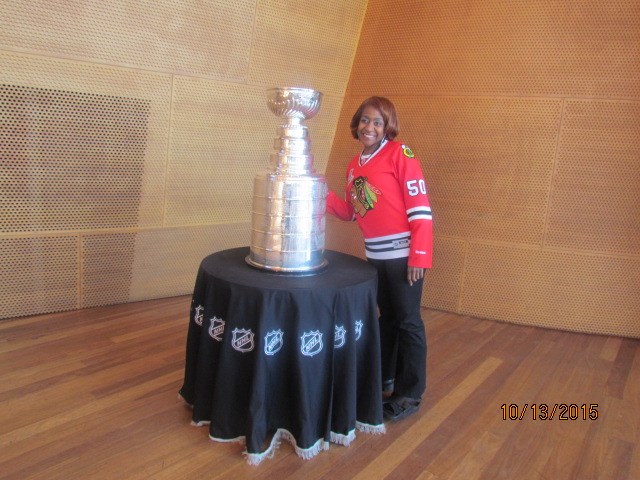 Anyone who really knows me knows that I love CHICAGO. Every since I was a child when we use to ride Amtrak to visit my relatives, I always had an admiration for the Windy City. My love has only grown over the years. It truly is my favorite city.  When I was in medical school, I did a rotation at University of Chicago. I stayed in Chicago for a month; it was so exciting. The month was busy, but I still got a chance to enjoy the city. Every since my rotation, my goal was to secure a job and move to Chicago.

Well, finally the opportunity came. I was on vacation skiing something I love to do. I ran into an orthopaedic surgeon that I had met when I was doing a rotation at University of Chicago. He was a first year resident at that time. He told me he was looking for another surgeon to join his group. I visited, interviewed and ended up taking the job. So in July 2013 I moved to Chicago. My dream had come true.

One of the many reasons I fell in love with Chicago, is that it is truly is a sports town. I am a sports fanatic. Football is my favorite sport, and basketball is my second favorite. This year I found a new sports appreciation, hockey. The Chicago Black Hawks have won the Stanley Cup in three of the last six years which is quite impressive. Since my knowledge of the sports was very limited, my sports buddy found pleasure in schooling me in the game. During the playoffs we use to frequent sports bars to get the whole experience. Every time the Chicago Black Hawks scored a goal, they rung a bell, and played the Hawks song.

The last game was intense the Black Hawks were not playing well initially. It seemed as if they were struggling to keep the puck.     My sports buddy started singing the Black Hawks song, then they scored. We then scored again, and our goalie Crawford shut out Tampa Lighting. We won; we were champions again! We left the bar and went to the United Center to celebrate with all the fans. It was quite the adventure. People were high fiving each other, yelling Black Hawks, hanging out of their cars, and blowing their horns.

The following day, we got the information regarding the championship parade. It would be Thursday June 18th. I rearranged my schedule. I had to go to the parade and rally, I could not miss it. As I stated I am new to hockey, and have never been to a championship parade.  When the Philadelphia Phillies won the World Series in 2008,  I missed it all.  Although I was living in Philadelphia at the time, I was in Mississippi. My mother has just passed from breast cancer, and we were planning her homegoing celebration. This celebration/ parade meant allot to me. It made me think about my heart, my mom. I thought about the state I was in then.  All I could do was thank God he brought me through.

The night before the parade and rally, I was so excited I could barely sleep. I woke up at 3am. I could not go back to sleep. I stayed in bed until about five. I could not take it anymore. So I got up made me some breakfast, watched some news coverage, got dressed and walked to find a stop on the route. I made it there at about 7am.

I then texted my two friends that were joining me, and gave them my location. I found the best spot on a major corner. A camera man was posted there initially , but later moved to the street. I took his spot, me and a few other fans. My sports buddy finally came around 9am. He worked his way to through the crowd to find me. I saved him some room as much as I could. My other friend decided she only wanted to do the rally. My sports buddy and I waited and waited. It was so much fun watching all the people out there. Finally we saw buses. I had so idea there would be so many. This was my first championsip parade. There were buses, and trolleys with so many people. My sports buddy explained to me that the families, and old hockey players also are in the parade.

After the procession, we walked to Solider Field to meet my other friend for the rally. We get to our seat about thirty minutes after the start. My sports buddy went to the last two Black Hawks championship parades.  The past rallies were at Grant Park there were so many people, that there would be no way to do both. This year the rally was moved to Solider Field because of all the rain. Solider Field held less people so it was possible to maneuverer our way over there. Grant Park was not in suitable condition for the rally. The program was nice. They talked about the history of the Black Hawks, and all the players were announced.  They came up to hoist the Stanley  Cup. It was truly awesome. The program ended with confetti and the  Black Hawk song. I am so glad I rearranged my schedule to take part in Chicago sports history.

As we were leaving I got a call from hospital.  So I walked home, and then headed to work. It was so worth it. Seize the day, enjoy every moment of life. Tomorrow is not promise.