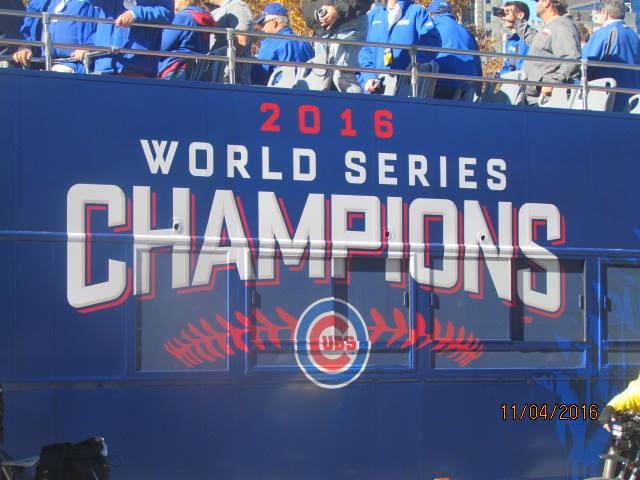 The Chicago Cubs are the 2016 World Series Champions. After 108 years they finally win the World Series. Anyone who knows me knows I love sports. It is a passion unlike no other. I admit while many of my native Chicago friends may have been fans all of their life, I have only been a fan of the Cubs for two seasons. It started with the HBCU ( historically black college and university day last year). I thought it would be a fun outing.  My first experience was  awesome. They were playing the Pittsburgh Pirates, and if they won they would clinch a wild card spot in the playoffs. They did not win, but it was exciting. They ended up clinching the following day. I am not a baseball scholar, football maybe but I didn’t know  all the intricacies of baseball. Thankfully my SB (sports buddy) was there and taught me more than the basics. We went to the game, and hung out in Wrigleyville afterwards. The bar had a band. It was my first of many outings to Wrigleyvile.

Well, the Cubs made it to the National League playoff round, but not to the World Series in 2015, but they had made me a fan. I was all in. Prior to 2015, the last baseball game I had watched in it’s entirety  was in 2008 when  lived in Philadelphia and the Philies were in the World Series. This year was different they had the best record in baseball and were the first team to clinch a playoff spot. I was blessed to get tickets to a Cubs game on my birthday, and I really was all it. It was an awesome gift.

This year the playoffs were different, and I had a few more friends jump on the bandwagon. It made our trips to Wrigleyville more fun. My best night was when we clinched the Pennant and were going to the World Series. My favorite morning show Mike and Mike also made a visit to Chicago. I had to get up to go before I went to work. I was seizing every moment.

The city was all in. Chicago Cubs were in the World Series. So we loss the first game, but we still were excited. Game two we won, and the World Series  then returned to Chicago for game three.  My prediction was we would win two out of the three games and they clinch in Cleveland at game six.  Well we lost game two games in a row, and we were about to face elimination, but God. Seriously people always state that God does not care about sports. I beg to differ, God cares about all our needs. I prayed and prayed, and continue to believe we would win.

Game five when I was at the Eagles bar trying to watch football and baseball. I was paying more attention to baseball and my Eagles were winning so I decided to join my other friends in Wrigelville. Ok, I left and stopped watching football to watch baseball, proof that I was really a Cubs fan. ( I am a football fanatic- seriously I may need intervention)  We won, and I knew we would win. Game seven was one for the record books. It stared with a homer by our lead off hitter Fowler. We were going to win. I still was confident, even with their runs we were still were winning. That is until they tied the game. My stomach started hurting. I was like Why do I care so much.  As I was standing in Wrigelville watching the game in the street looking in  the window of a bar following a rain delay. I truly was all in. Then it happened we won. 8 to 7 we were the World Series Champions after 108 years we were victorious.

The parade was epic. I took the day off. It meant more than the world to me. In 2008 when the Philies won the World Series, I was with my mother who was dying of breast cancer. I wanted to celebrate for her although she was not a Cubs fan. She loved sports, college football was her thing.

As I live my life, they are so many things that I pray for/about they have not come to pass. I keep believing, keep confessing his word. I know if I only believe God will bless me, and later will be greater. Never give up hope, only believe.

Matthew 21:22 – And all things, whatsoever ye shall ask in prayer, believing, ye shall receive.