NFL Draft 2017 Did Not Disappoint 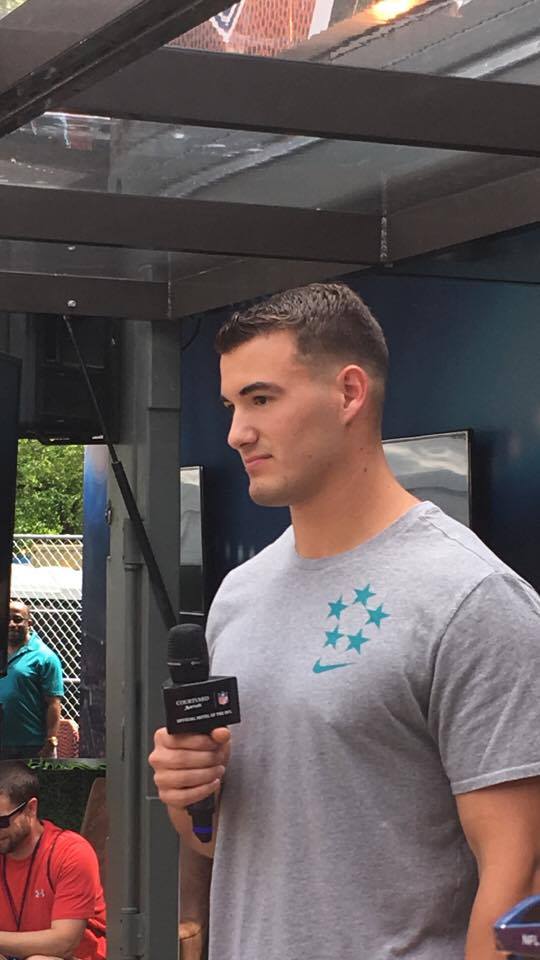 I had a mission when I boarded the plane to my old city- Philadelphia. My plan was to thoroughly explore the Draft. I wanted to compare the Chicago to Philadelphia Draft experience. Chicago had a marked advantage as I would could walk a few blocks and be in the center of the action.

I arrived the night prior to the Draft. I had to go to bed early so I could make the Mike and Mike show the morning of the Draft. It would be the sixth time I had the opportunity to go to the show. I made friends while I was in line with random people, as I usually do while waiting to get in the show. I have yet to get anyone else to get up early to attend the show with me. I was fortunate enough to get on the first row with some sports bloggers.  The show was jammed packed- Adam Schefter was the first guest. He gave hints of who he thought would be the number one draft pick. Todd McShay came with more of the same, draft buzz. “Booger” Anthony McFarland was on as a usual host. The four hours of the show whizzed past. It was 10 AM before I knew it, Mike and Mike was over. I was fortunate enough to get Booger’s autograph on my football, I could not get Donovan McNabb’s. He was the last guest, and ran over to the First Take’s set, before I could get it.

Then I headed to the Draft Town. I figured there would not be many people there early, and I was wrong. I started to walk around and take some pictures. I saw some of the same attractions that I remember from the Chicago Draft town. I then made the mistake of going to the Pro-Shop. Well maybe it wasn’t a mistake. I got some new Eagles gear (like I needed  more). In the end, it was good I went early, because my items were sold out on the last day. Next, I checked out a booth where I could be a broadcaster. My face, but it was Suzy Kolber’s voice.  Many may not know but my dream job would be to be a sport injury analyst. A job where I could take about my favorite – sports combined with my profession, as an orthopaedic surgeon.

Well, while I was waiting to do my broadcast – the prospected number one draft pick Mitch Trubisky came for “Question and Answer Session” I figured why not get his autograph. He was from University of North Carolina (my medical school Alma Mata).  Ironically, he ends being drafted by the Chicago Bears – my present city’s team.  Although I am not a Bears fan, it seems that people assume I am.  Up next, was the Honda Rookie challenge which was awesome. Reason being is that that I love sports trivial. I love the history of the game of football, is so intrigues me. I thought that I knew about football while I do, but it was not enough. Out of ten questions the most I could get correct was eight. So, I kept playing, as the prizes for the top four players of the day was an autographed football. My present football is almost now full of signatures. I stopped by that booth all three days.

While, I am an Eagles fan, my first recollection of football was as a child. My Dad was a Steelers fan, and my Grandfather was a Cowboy fan, and they use to argue on Sunday. I chose the Steelers. So, the Pittsburgh Steelers were my first football team, but I really fell in love with football while living in Philadelphia doing my sports medicine fellowship. As I stood on the sidelines taking care of athletes I learned to love the game. Lavon Bell was doing a “Question and Answer” session, and an autograph session I was excited. The hours past, and my phone died. I was supposed to leave and go to a Happy Hour to celebrate a friend’s birthday. Well without my phone it was impossible to get an Uber to get to Happy Hour and to make it back for the start of the Draft coverage.  I missed seeing some of my friends, as a result. I then meet up with a crew of friends that were also in town for the draft: Green Bay Packer fans, Redskins fan, and a Bears fan. We all watched the coverage together. I also met some random sports fans standing around us.

Everyone was in suspense who would be the first pick in the draft. Who would be the second? Well the rumor or the suspicious of Mitch Trubisky going number one was wrong. William Garrett be the first draft pick for the Cleveland Browns. Well then there was more drama with the Bears trading with the 49ers to get Mtch Trubisky the second draft pick. That was a surprise the rumor was Chicago would pick a defensive player, again wrong. Other noteworthy surprise was the Cleveland Browns trading with Houston and Houston getting Deshaun Watson at the twelfth pick of the draft. I wanted the Eagles to get Jonathan Allen- Roll Tide. I am an Alabama fan. I however heard from the “draft experts” standing around me that he was a solid pick. I talked to so many random people at the draft. That is one thing I love about sports, it has a wonderful way of uniting people. Well, I was at the draft until 11pm. My crew had left me. I was trying to say until the Steeler’s pick at 30, but they got TJ Watts. If he is anything like his brother JJ Watts, he will be an awesome NFL player.

The second day I get there around two. The plan was to get some autographs, listen to a few picks, and then go meet up with some friends. DeAngelo Williams my favorite running back with pink locks was signing autographs. His story of why he had pink locks made me an instant fan. His mom died of breast cancer, and so did my mom. Well, my picture with him was my favorite of the Draft weekend.

Randall Cunningham, was signing autographs- the legendary quarterback from Eagles.  As I stood in line for his autograph I received a text stating I was in the standby list to go inside the theater. The Philadelphia Draft was all outside which was the first time ever that it had been.  Philadelphia Draft made history.

Part of The attraction, and what made people download the draft app was when people scanned the bar codes, people were automatically placed in stand-by list (although it was long) to get a seat in the theater. Well my number came up the second night. I had to wait for a while, but I made some new friends in line. Two Eagles, and one Seahawk fan entertained me. When we got in, the Eagles fans I was talking to, convinced me into walking up to the seats up front. Well, I worked my way to the second row, and my new friends left.  I stayed, and I was excited there were legends naming picks- Jim Brown, Frank O’Hare, Walter Payton Men of the Year nominees/winners (Greg Olsen, Larry Fitzgerald, Thomas Davis-just to name a few) The second Eagles draft pick was about to be announced. The fans were cheering and the camera panned the audience. As I was sitting there my cousin texted me a picture of me on ESPN. Well I stayed to the end. I missed hanging out with my friends, and even turned down a date. I am an over the top football fanatic.

Day Three, I really was not going back, but one of my ski-football friends was driving in from New Jersey, so I would have to go meet with her. She was in Chicago last yea, and came to see me at Chicago Draft town. It was pouring rain so she wanted a do-over. Well, I meet her and her cousin and we made it our mission to scan all the bar codes at all of the booths. One if 30 codes were scanned the prize would be a NFL Draft commentary pin. Also by scanning we all were eligible for several drawings for a multitude of prizes. We then make it back to the theater for the final picks. We stayed until the final pick 253.

So, Chicago is still my favorite Draft town. I maybe bias, because it is my favorite city. I can’t wait until they announce where next year’s will be. This may become an off-season yearly ritual.